Lessons in Nonverbal Commmunication, a post-Kobol Kara/Lee story, written to an old

Tonight is the rewatch of the Miniseries, we'll start right around 9pm, so don't be late.

It's all about remembering when we first started falling in love with this great series and also Lee and Kara, Apollo and Starbuck.

We can chat right in this thread, or we can chat on Twitter, whatever everyone prefers.

Should be lots of fun haven't seen the miniseries in a few years.

There is definitely some interest in the Mini Series rewatch. Now the trick is figure out when to have it. Also I'm wondering do we want to do a one night rewatch of entire Miniseries or do we want to break it in half, like it was done originally.

I want to do it on December 8th and maybe the 9th if we want to split the miniseries in half.  I've put up a couple of polls to get a feel for when people want to do it. Feel free to add suggestions in the comments section.

December 8th is next Sunday. So I put up times throughout prime time on Sunday night. Also post in comments to let me know if there is more than one time you'd want to watch it. Let's see if we can get some kind of consensus.

Open to: All, detailed results viewable to: All. Participants: 7

Should we watch Miniseries on one night or two?

When should we start the rewatch? (Rewatch time is Eastern Standard Time)

We are quickly coming up on the 10th Anniversary of the Mini Series (Can you believe it?). It originally aired on December 8th and 9th in 2003 on Syfy.

I was just thinking maybe we could do a rewatch of the Miniseries right on the day of the anniversary? Falls on a Sunday night, Monday night, so that may be feasible.

Just floating this out there to see if there is any interest on here, if so then we could nail down the details.

Minseries was awesome, and I think it's 10th anniversary should be remembered.

I love the way they're looking at each other.  :D 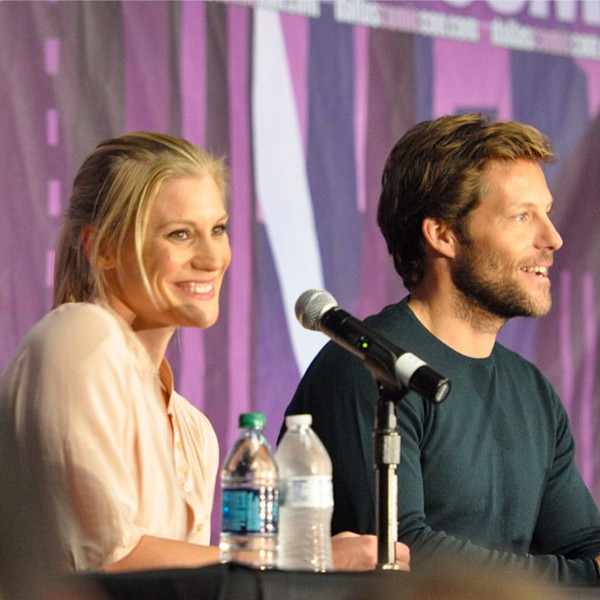 So, looks like our favorite pilots will both be attending (Katee confirmed it on Twitter, Jamie technically hasn't but he just got home from filming The Smoke in London, so I assume he has some downtime right now) Dallas ComicCon's Fan Days event next weekend October 4-6. On Saturday, they're doing a panel together at 3 pm and a photo session (together and separately from 4 - 4:30. (They seem to be the only BSG guests in attendance.) On Sunday, there's another photo session from 3:10 to 3:30.

Who's going? Who's bringing tequila? Who's gonna report back every little detail for us die-hards? ;)

(And you know, it's been awhile. Feel free to use the comments to just get your general pilots!squee on.)

If you haven't seen it yet, there is a lovely essay HERE at Entertainment Weekly's website talking about our pilots. Sarah Caldwell makes the case (with an awesomely impassioned shoutout by Darren Franich) for why Starbuck and Apollo are the best couple of all time.

It's hard not to copy and paste the whole damn glorious thing, but here are some choice excerpts:

Picking my favorite TV couple was a decision I took very seriously!... In the end, I had to go with my heart. So I picked the couple who constantly made me feel like someone was grabbing my heart tightly between their fingers and squeezing: Starbuck and Apollo (or Lee and Kara, played by Katee Sackhoff and Jamie Bamber)...

On Battlestar Galactica, both Starbuck and Apollo are heroes. Both get amazing storylines. Both save the day multiple times. So maybe the fact that they don’t end up happily ever after is okay because what is intriguing, and devastating about them as a couple is that these two titans never really get to have a typical relationship. They’re too busy saving humanity. Battlestar Galactica forced its viewers to think about how people would need to adapt to the end of the world — politically, ideologically, spiritually — and maybe in this version of society, couples don’t get the luxury of living happily ever after. All they get is stolen moments on the beach and the profound knowledge that both have trusted each other with their lives. Maybe that’s enough. ...

Watching this scene [ED: the almost-sex scene in Scar] again, I remember how rough these two were with each other. As kind as some of their moments are, there are even more moments where they’re screaming in each other’s faces. Each holds the other to the highest standard. Still, there’s a level of vulnerability that each can have around the other that they can’t around anyone else. ...

In the end, the show didn’t know what to do with these two. I still wanted them to have a happy ending and I think most viewers would agree. Even though the show sets it up that they never really could end up together, hopeless romantics will not be detoured in their desires. Sackhoff has said that Starbuck and Apollo were soul mates, but they weren’t meant to be together. Regardless if you buy that or think that love should conquer all, it’s hard to deny that their relationship was one of the most powerful and daring looks at human interaction ever seen on TV.

bsg_epics is having another SHIP WAR! Last year, Kara/Lee won the war, but were nearly defeated by the newly-minted Kara/Laura ship. That same ship and a few others are fueled by some VERY prolific writers and Kara/Lee could very well lose this year. It is only FOUR DAYS LONG so Please write a fic!!

There are currently 262 LJ users watching

no_takebacks and if we had even a quarter of you writing a SINGLE 100-word drabble, we could win this thing. I know many of you are not writers, but for those of you who are, PLEASE LEND A HAND.

Everyone else, please leave prompts for those who will be writing.